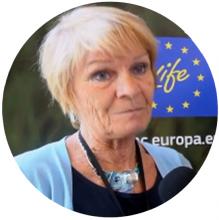 What are (and what were) the opportunities and threats in your daily work?

The opportunities were, on the one hand, a number of European processes concerning biodiversity that were started 20 years ago, when I joined the Flemish government. These processes emphasised the importance of international cooperation for nature conservation and developed the European policy framework for this with the first EU Biodiversity Action Plan and the mandatory implementation of the EU Birds and Habitats Directive. At that time, the threats were the lack of knowledge and information in other policy areas and therefore the reluctance to contribute to this implementation, as well as the limited involvement of our agency (ANB) in international processes.

We have now come to a situation where there are numerous collaborations, overarching and structured consultations with various actors and target groups. And Flanders has meanwhile consolidated considerably on the international agenda. The high fragmentation of green spaces, strong urbanisation and extensive land use by agriculture and infrastructure, and thus high pressure on nature everywhere, mean that nature conservation requires a high commitment of both resources and human resources, along with an important commitment from other sectors - and that in itself poses a threat.

Did bodies like the Belgian National Focal Point to the CBD, the Belgian Biodiversity Platform and/or the Steering Groups Nature/Biodiversity helped to overcome these difficulties, and how?

Through the Steering Group Biodiversity and the Steering Group Nature, it was possible to agree on a division of tasks so that the human burden was shared but representation and knowledge sharing could even increase. The Belgian National Focal Point to the CBD has supported Belgium's increasing engagement in further developments of CBD-related themes with the general coordination of feedback and reporting, of information on meetings, networking for exchange of expertise, organisation of special events to highlight Belgium's commitment to biodiversity conservation. Thanks to the Belgian Biodiversity Platform, an extensive network of thematic experts within and outside the administrations has been set up, the exchange of scientific knowledge has been strengthened, and contributions have been made to the scientific underpinning of positions.

The functioning of the Steering Group also demonstrates to the regional authorities the importance of the overarching and also horizontal impact of biodiversity across sectors, regions and borders.

What are your wishes for biodiversity in Belgium for the future?

That the value of biodiversity is truly recognised at both political and societal levels, that the benefits of nature can be better and more concretely demonstrated; and that the intrinsic value of biodiversity can be communicated. This would enable us to show the importance of nature restoration and conservation in a comprehensible way. Through the existing networks, even more people from various policy domains and target groups, sectors, social groups... would be engaged to contribute to effective mainstreaming of biodiversity. Nature conservation is based on networks of sites, across regions and borders, and these can only be achieved by networks of committed individuals!