The Belgium's National Biodiversity Strategy has been updated. The publication is available only in electronic version and can be downloaded in various languages from this page. The text is available in English, French, Dutch and German.

A general information brochure in EN / FR / NL / DE may be ordered by mail at nfp-cbd [at] naturalsciences.be.

The implementation of the Strategy based on the national reports can be followed through https://be-tct.biodiversity.europa.eu/national-strategy/objectives 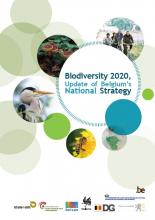 The updated Strategy in a nutshell (p.8-9)

Biodiversity has many dimensions, and the importance of these has still not been adequately addressed. It provides, among other things, resources including all our food and many medicines and other life support products. Biodiversity underpins human well-being through the provision of ecological services that are, for instance, essential for nutrient cycling, soil fertility and fruit-tree pollination as well as clean, fresh water and air. It also provides a wide range of recreational opportunities and it is an inexhaustible resource for learning, education, inspiration and cultural identity. Biodiversity conservation is therefore a common concern for all of humankind.

The Strategy is the Belgian answer to the formal obligation under the CBD and also takes the other commitments made at European and international level into account. It offers a framework for policymaking and further development of actions. It includes the existing Regional and Federal frameworks and action plans and it supports their integration and fine-tuning. It aims at giving strategic political orientations in order to allow actors for biodiversity in Belgium to work in partnership to contribute nationally and internationally towards the achievement of the target of halting the loss of biodiversity by 2020. This will be achieved by ensuring a more effective and coherent implementation of the three objectives of the Convention on Biological Diversity, while also taking into account the other biodiversity agreements where relevant. The Strategy pays particular attention to creating more coherence and filling the gaps in existing Belgian instruments and optimising integration of biodiversity concern at national and international level.

The Strategy has a vision and a general objective that are in line with the CBD Strategic Plan and the EU Biodiversity Strategy to 2020:

Vision: “By 2050, our Biodiversity and the ecosystem services it provides - our natural capital - are valued, conserved, appropriately restored and wisely used for their intrinsic value and for their essential contribution to human well-being and economic prosperity, so that catastrophic changes caused by the loss of biodiversity are avoided”.

General objective: “Contribute nationally and internationally to the achievement of the 2020 target of halting the loss of biodiversity and the degradation of ecosystem services, and restoring them insofar as feasible, while stepping up our contribution to averting global biodiversity loss”.

The strategy spells out a range of 15 priority strategic objectives (objective 14 is new) and 85 operational objectives (eight of them are new) to guide the development of actions by the competent regional and federal authorities. Following the recommendations to update the NBS, the content of the chapter on implementation and follow-up of the NBS and some other parts have been somewhat adapted to fully reflect the commitments to meet the CBD Aichi targets and the new EU Biodiversity Strategy to 2020 (see appendix 4 - Concordance of the Aichi Targets with the EU Biodiversity Strategy 2020 and with the updated NBS).

The text of the NBS clearly identifies, for each objective, the link with articles of the CBD, the relevant Aichi Target, thematic programmes of work, guidelines, etc. adopted under the Convention as well as the relevant EU commitment. Its main focus is on sectoral integration of Biodiversity.

Where necessary, implementation measures are taken in a coordinated way by the Federal and Regional Governments and the other relevant actors. Examples of achievements until 2009 are published in the fourth national report to the CBD (2009) and in the mid-term assessment of the NBS (2012).

The updated strategy is established for an eight-year period (2013-2020). No specific actions or indicators are adopted in the Strategy itself but they will be adopted and developed at a later stage in the implementation process, in consultation with all the actors for biodiversity in Belgium. Reporting on the progress made and on the obstacles to implementing the NBS takes place through the national reporting procedure for the CBD (2014, 2019). The information on implementation of the NBS is also published on the website of the Belgian Clearing-House Mechanism.

Many different actors have an active role to play in the implementation of the Strategy: ministries and administrations, advisory and consultative bodies, research institutes, NGOs, information centres, individuals and community groups, etc. Several actions will have to be performed simultaneously in different sectors and - after further consultation and coordination - on several administrative levels.